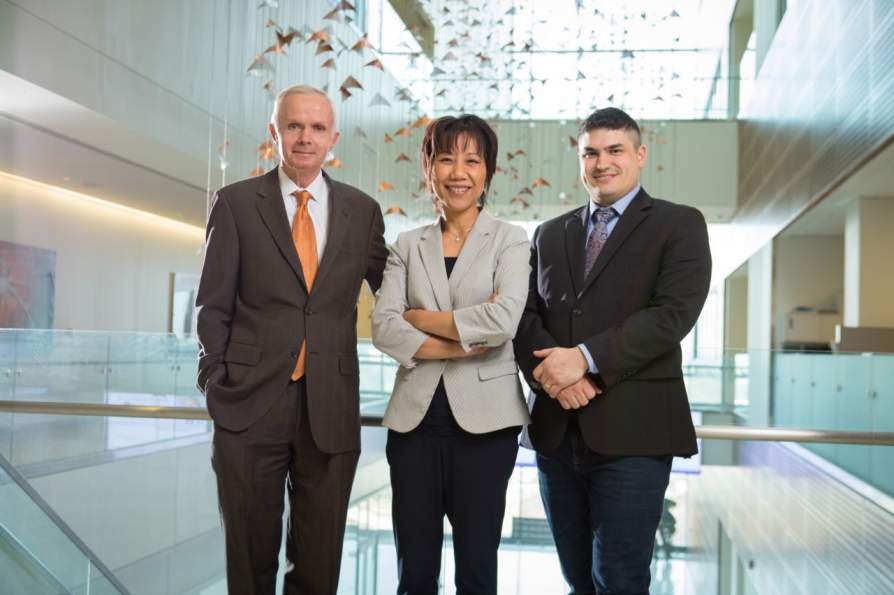 Years later, he is honoring her memory by working with University at Buffalo engineering and medical researchers with the goal of preventing similar deaths.

Jeff Harvey is co-founder of Neurovascular Diagnostics, a UB spinoff company that is developing a low-cost blood test to screen high-risk patients for unruptured brain aneurysms — pathological bulging in blood vessels that can eventually burst.

The effort just got a boost from the National Science Foundation (NSF), which has awarded the company $750,000 in Phase II Small Business Innovation Research (SBIR) funding, building on the company’s successful completion of Phase I SBIR research.

“Today, one of the most important ways to determine if you have an unruptured brain aneurysm is to have an MRA [magnetic resonance angiogram]. This can cost thousands of dollars, and insurance companies may not pay for it because patients often do not have any symptoms,” says Jeff Harvey, chief financial officer of Neurovascular Diagnostics. “Because of what happened to my wife, one doctor said my children should be tested on a regular basis. To spend thousands of dollars every few years — that’s a lot of money.”

In addition to Jeff Harvey, co-founders of Neurovascular Diagnostics include:

Brought together by chance and circumstance

While most brain aneurysms don’t rupture, those that do can cause severe brain damage, and many patients die before reaching the hospital. According to the National Institute of Neurological Disorders and Stroke, about 30,000 Americans suffer a brain aneurysm rupture every year. The Brain Aneurysm Foundation reports that worldwide, nearly 500,000 deaths occur each year from ruptured aneurysms.

Carol Harvey made it to the hospital, but she died soon after.

Following this loss, Jeff Harvey joined the board of directors of the Brain Aneurysm Foundation, where he established a fund in his wife’s memory, the Carol W. Harvey Memorial Chair of Research.

In 2015, Meng and Tutino, then her PhD student, submitted a grant application to the Brain Aneurysm Foundation to conduct innovative research geared toward detection of unruptured aneurysms. The study was selected for funding, and by chance, through the fund honoring Carol Harvey.

After the announcement of the awards, Jeff Harvey and Meng sought each other out – not difficult, given that they were both in Buffalo.

Jeff Harvey found the funded research extremely interesting and convinced Meng, Tutino, and Snyder to start a company with the goal of translating their work into a technology that could be commercialized to help patients.

The team also includes Kerry Poppenberg, a UB PhD candidate in biomedical engineering who is not employed by Neurovascular Diagnostics but works on aneurysm research in Meng’s lab through a grant from the UB Center for Advanced Technology in Big Data and Health Sciences (UB CAT), with matching funds from the company.

Like Jeff Harvey, Poppenberg was inspired in part by a personal experience — the loss of her grandmother, an avid reader with many interests who volunteered for numerous organizations, ranging from a nursery school to a hospice program, after retiring from a job at an insurance company. She often cared for Poppenberg and Poppenberg’s siblings when they were kids.

“I took Dr. Meng’s class and I learned about the research she was doing,” Poppenberg says, regarding how she became involved in Meng’s lab. “My grandmother died of an aneurysm, so it appealed to me that this is a project that can help people.”

The screening that Neurovascular Diagnostics is developing with NSF support would look for signs of a brain aneurysm in patients’ blood cells. As Tutino explains, the thinking is that inflammation caused by a brain aneurysm may alter gene expression in cells, causing levels of some RNA molecules in the cells to rise, and others to fall. The company’s blood test — AneuScreenTM — would detect these differences. The NIH-funded research could further enhance the test by identifying biomarkers that could provide insight into how risky a patient’s aneurysm may be.

Patients who test positive in the screening would then see a doctor to obtain an MRA or other more definitive testing to determine whether they have a brain aneurysm or not.

The ultimate goal? To save lives, says Jeff Harvey, who grew up in the hamlet of Snyder and met his wife at a next door neighbor’s party in high school. She was upbeat, outgoing and amazingly organized. They married in 1975 and raised two children together — a daughter and a son. Outside the home, she worked as a speech and hearing specialist.

Another spinoff inspired by family illness

He is also co-founder of Tonus Therapeutics, another startup he launched with UB researchers in response to illnesses his loved ones were grappling with.

His grandson, JB, has Duchenne muscular dystrophy (DMD), a genetic disorder that causes children’s muscles to waste away. Tonus is developing a drug — derived from a protein in tarantula venom — that could help treat the disease. The company has completed some preclinical testing and is seeking funding to explore whether the drug could enhance the effectiveness of gene therapies for DMD.

These efforts all began in the summer of 2009, when Jeff Harvey called Frederick Sachs, PhD, SUNY Distinguished Professor of Physiology and Biophysics in the Jacobs School.

Sachs’ team had discovered the potential muscular dystrophy drug, and Jeff Harvey said he was looking to invest in promising treatments. Jeff Harvey had found Sachs, in a moment of serendipity, through a Google search.

“I didn’t know what to make of it at first,” Sachs said in an interview a few years ago. “We had lunch together, and I explained the history of my attempts to get big pharma interested. In my discussions with Jeff, it seemed like maybe what we should do is make a biotech company and then try to raise funds to take care of what big pharma wouldn’t do.”

“I have an image in my head of a boy standing up out of a wheelchair and walking away,” Sachs said. “It’s a little fanciful, probably, but that’s the image I have. As I get older, I would feel really good to have helped some kids.”

Within months of meeting, the partners launched a firm with Sachs as president and Harvey as chief financial officer. UB researchers Thomas Suchyna, PhD, and Philip Gottlieb, PhD, were also co-founders.

Over the years, UB’s Business and Entrepreneur Partnerships (BEP) teams have provided both Tonus Therapeutics and Neurovascular Diagnostics with support, ranging from R&D funding from the UB CAT for both companies, to the opportunity to participate in UB’s NSF I-Corps Site Program for Neurovascular Diagnostics. I-Corps prepares scientists to commercialize discoveries.

Neurovascular Diagnostics is located in the UB Center of Excellence in Bioinformatics and Life Sciences (CBLS).

The company also plans to utilize other university research facilities, including the Genomics and Bioinformatics Core at CBLS, along with the UB Biorepository, part of the Buffalo Institute for Genomics and Data Analytics (BIG) at UB. BIG, a component of Governor Andrew M. Cuomo’s economic development efforts to grow Buffalo Niagara as a bioinformatics and life sciences hub, will support Neurovascular Diagnostics’s R&D efforts by connecting the company to technical expertise and subsidizing the cost of engaging with high-tech facilities at the university.

Jeff Dunbar, director of Technology Transfer at UB, says Jeff Harvey’s passion for creating change in the face of adversity is inspiring. The two have known each other for about a decade now.

“For both startups, Jeff Harvey is offering his business experience to guide his scientific co-founders through the challenging commercialization process,” Dunbar says. “When you add a shared passion for helping people, it defines the type of entrepreneurial teams UB hopes to catalyze in Buffalo.”

People interested in using their passion to help grow Buffalo’s innovation economy can visit BEP’s website to learn more about opportunities to get connected and involved with startups that have university ties.