Bullying in the Workplace

The Topic Adults Should Be Talking About 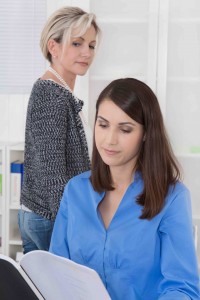 In a day and age where women are regularly pictured on covers of magazines such as Time and Entrepreneur, and news reports are fervently discussing women breaking the “glass ceiling,” it is hard to imagine any report of bullying in the workplace among women. Women are not raised to be confrontational; we are supposed to be peacemakers and nurturers.

According to new research, part of the reason female bullying is rising so rapidly directly relates to women at higher levels feeling threatened by other women. They experience something called “value threat” or “competitive threat” which causes them to not want to help other women succeed in the workplace. Women that have paved the way for the younger generation climbed the corporate ladder in a very different society, so for many the mentality is one of “I was treated harshly to get to where I am, and I’m not letting you steal my spot.”

Another reason bullying is hard to identify has to do with the form in which the behavior is occurring. As adults, we often see sabotaging of one’s reputation, intimidation, browbeating or devaluing the employee. “These forms of bullying can make an employee feel weak, find it hard to document their concerns or even feel they are not supported by colleagues and therefore will not report it,” states Lindy Korn, Esq. When workplace bullying does happen, it can cost a company upwards of $10,000 in lost revenue a day, due to calling in sick or a lack of motivation to work by the bullied employee.

Fifty-one percent of companies have a policy against bullying, but less than 10 percent of employees adhere to them. Attorney Korn recommends that, “The affected employee first try to communicate with the person who they feel is bullying them. Write down what it is they are doing that is causing distress. If that doesn’t work, then sit down with your boss or their boss. Most companies want their employees to feel safe, knowing full well that employees who trust in a company and respect a company will be motivated to work to 100% of their capacity.”

Continuing to remain silent on the issue of workplace bullying implicitly validates the behavior. Whether male or female, bullying in the workplace should never be viewed as the norm. We have grown as a society, as a melting-pot for cultural diversity, and as an economy that supports women leaders—let that be what pushes our careers forward; teamwork, trust and guidance—let that be what we stand for in the workplace and as individuals.