Influenza Cases on the Rise in Erie County

ERIE COUNTY, NY— Influenza has arrived in Erie County, as well as in the rest of New York State. While generally the flu season here peaks in cases in mid-February, this season’s flu activity has been steadily increasing since mid-December. Influenza is a serious respiratory infection that is responsible for about 30% of all the respiratory infections during the winter season.

“The number of positive tests for influenza (“flu”) has been increasing each week in December,” says Dr. Gale Burstein, Erie County Commissioner of Health (“ECDOH”).  “Our surveillance data show that flu activity is currently widespread in Erie County, throughout New York State and most of the United States. It will likely continue to spread before we see the traditional flu season draw to a close.” 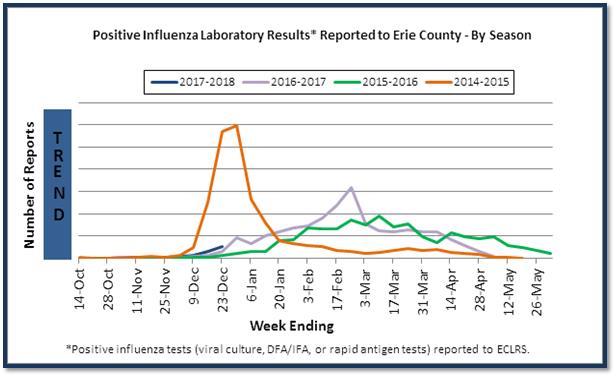 Most people with the flu will have a mild illness and can treat themselves with rest, fluids, and ibuprofen (e.g., Advil®) or acetaminophen (e.g., Tylenol®). If you have the flu, stay at home and rest. Wash your hands thoroughly and frequently. Avoid close contact with well people in your house so you do not make them sick.  Drink plenty of liquids to prevent fluid loss (i.e., dehydration) and treat fever and other symptoms with over-the-counter medication.

ECDOH urges Erie County residents to contact their health care provider or seek care at an urgent care center if they have difficulty breathing, shortness of breath, or dizziness and weakness from possible dehydration. The Centers for Disease Control and Prevention (“CDC”) recommends initiation of antiviral treatment as early as possible (within 48 hours of symptom onset), for those at high risk for complications:

Antiviral therapies may reduce the severity of illness, decrease the risk of complications (including hospitalization) and shorten the duration of illness. “Contact your primary care physician or an urgent care center if you are concerned about your symptoms” said Dr. Burstein. “Emergency Departments should be utilized for true medical emergencies. Typically, flu can be treated at home.”

It is NOT too late to receive a flu vaccine. Flu seasons are highly unpredictable since the influenza virus can mutate and it’s difficult to gauge which flu strain will dominate in any given year. But there are hundreds of thousands of hospitalizations and tens of thousands of deaths due to the flu in any given year, according to the CDC. The CDC recommends everyone receive a flu shot each year, even though the vaccine’s effectiveness may vary.

Flu vaccine effectiveness varies each year, but getting a flu vaccine is important not just to protect you, but also the people who are most vulnerable to catching the virus, such as older people, children, and people with compromised immune systems. It is especially important for certain populations at high risk for serious flu complications, as noted above, to also get immunized.  It is a mistake to only consider the benefits of flu vaccine in terms of disease prevented. Influenza vaccines do so much more in terms of preventing hospitalizations and medical visits because of influenza infection. And if you do happen to get flu but are vaccinated, it is much more likely that you will not suffer as severely as you may if you hadn’t been vaccinated.