The Beat Goes on at GVI – TAVR Is Changing Lives 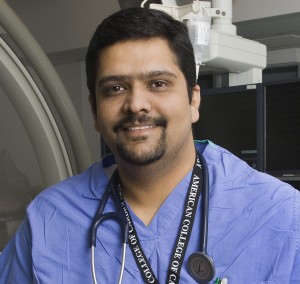 Janice Savey was out of breath and exhausted. Her heart valve just wasn’t working properly. Her cardiologist in Olean, where Janice lives, sent her to Buffalo General Medical Center and that’s where she met Dr. Vijay Iyer and her life dramatically changed.

Dr. Iyer told Janice she had aortic stenosis and needed a procedure called transcatheter aortic valve replacement (TAVR). One month later, the wheels were set in motion for her to receive this lifesaving procedure.

On January 11, 2012 at age 75, Janice underwent what she believes is nothing short of a miracle. “When I woke up I didn’t realize I had anything done. I sat in a chair the first day. Everyone kept asking if I was tired, but I wasn’t. I thought, ‘How is it possible to undergo something so serious yet feel absolutely no pain?’”

When the heart’s aortic valve is narrowed, blood flow is restricted. The condition is called aortic stenosis and it increases the potential for heart failure. Some people, like Janice, are not candidates for traditional surgery and were previously left with no options except medication, which only treats the symptoms and isn’t a cure.

During TAVR, an interventional cardiologist inserts a catheter into the heart one of three ways; through an artery in the groin (transfemoral approach), in between the ribs through the left ventricle (transapical approach) or directly into the ascending aorta (transortic approach). The artificial valve is compressed and fed through the catheter until it reaches the aortic valve. A balloon expands the artificial valve within the patient’s diseased aortic valve and the catheter is removed. The new valve replaces the old, increasing blood flow throughout the body immediately. And best of all, the procedure is minimally invasive.

TAVR has significantly improved heart function, survival rates and quality of life for patients previously deemed inoperable. To date, Dr. Iyer and his team have performed the procedure on 68 patients, with a 98% procedural success rate. The youngest patient was 65, and the oldest 96.

Buffalo General Medical Center is the only facility west of Rochester that performs TAVR.

Meanwhile, Janice continues to feels great, and says Dr. Iyer is remarkable. She tells people that if they are having a problem, “Call Dr. Iyer and talk to him. Don’t be afraid to ask him your questions.” Dr. Iyer agrees, and says he doesn’t want anyone to feel too intimidated to call him. He wants people to know they aren’t alone and that someone else cares about them.

In January 2014 Dr. Iyer and his team hosted an anniversary luncheon for TAVR patients and their families who have undergone the procedure. It’s been two years and there is a lot to celebrate.