ImageCity & State, which covers government and politics in New York, publishes the list to honor the 100 most influential women in government, public affairs, business, culture, and social sciences. They rank Eve as 40th on its list of powerful female leaders and Dr. Johnson as 41st.

Dr. Johnson became the first woman ever to serve as chief executive of Roswell Park in 2015. She joined the cancer center in February 2002 from the University of Pittsburgh Cancer Institute/ University of Pittsburgh School of Medicine, and is currently President & CEO at Roswell Park. City & State notes that Dr. Johnson “recently celebrated the renewal of the center’s designation as a National Cancer Institute-designated facility, as Roswell Park received its highest score ever, as well as a $22.5 million grant.” 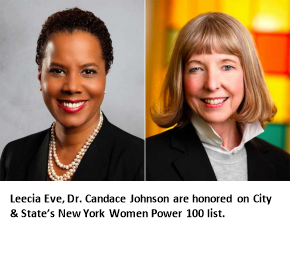 Buffalo native Leecia Eve is Vice President for Government Affairs for New York, New Jersey, and Connecticut with Verizon Communications Inc. Appointed to the Roswell Park Board of Directors in 2018, her past experience includes roles as New York’s Deputy Secretary for Economic Development, Senior Vice President and General Counsel to Empire State Development, and aide to both U.S. Senators Hilary Clinton and Joe Biden. A 1990 graduate of Harvard Law School and the John F. Kennedy School of Government, Eve also spent five years in private practice with Hodgson Russ LLP, where she became the first African-American general equity partner in the law firm’s history.

The women on the Power 100 list will be honored at a reception tomorrow at the Ainsworth Chelsea. See the full list at https://www.cityandstateny.com/articles/power-list/power-100/new-york-2019-women-power-100.html.

For an online version of this release, please visit: https://www.roswellpark.org/newsroom/201911-new-york-women-power-100-honors-roswell-park-leaders-dr-candace-johnson-leecia-eve

Roswell Park Comprehensive Cancer Center is a community united by the drive to eliminate cancer’s grip on humanity by unlocking its secrets through personalized approaches and unleashing the healing power of hope. Founded by Dr. Roswell Park in 1898, it is the only National Cancer Institute-designated comprehensive cancer center in Upstate New York. Learn more at www.roswellpark.org, or contact us at 1-800-ROSWELL (1-800-767-9355) or ASKRoswell@RoswellPark.org.