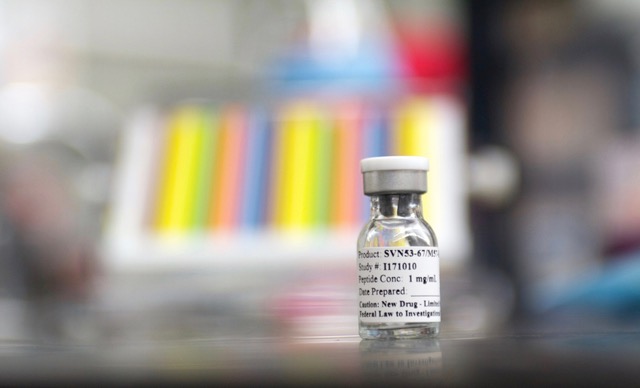 BUFFALO, N.Y. — The inventors of a new and unique cancer immunotherapy developed at Roswell Park Comprehensive Cancer Center have announced a major step forward with that therapy, known as SurVaxM. MimiVax LLC principals Robert Fenstermaker, MD, and Michael Ciesielski, PhD, have announced that the company, spun off from Roswell Park in 2012, has entered into a China-exclusive licensing agreement for SurVaxM with Shanghai Fosun Pharmaceutical Industrial Development Co. Ltd., a wholly-owned subsidiary of Shanghai Fosun Pharmaceutical Co. Ltd. based in Shanghai, China.

Under the terms of the agreement, Fosun Pharma and MimiVax will work to develop and commercialize SurVaxM for patients in the U.S. and specified territories in China. A $10 million upfront payment made to MimiVax will enable and partially fund the upcoming pivotal clinical trials in both the U.S. and China. MimiVax is eligible to receive an additional $28 million in developmental milestones and $110 million in sales milestones.

SurVaxM, which MimiVax is developing based on technology licensed from Roswell Park, is an immunotherapy designed to stimulate the immune system to kill tumor cells that contain survivin, a protein that helps cancer cells to resist conventional treatments. The drug, which is manufactured in the United States, has been studied most extensively in patients with glioblastoma, an aggressive and hard-to-treat brain cancer, but the drug’s target, survivin, is also present in many other types of cancer, including multiple myeloma, neuroendocrine, medulloblastoma, melanoma, kidney and breast tumors.

Based upon positive results from initial phase I and phase II studies, the team expects to advance to large, multicenter randomized phase II trials in the coming year both in China and in the U.S. A single-arm phase II study in 63 patients with newly diagnosed glioblastoma last year demonstrated significantly longer survival time for patients treated with SurVaxM, with 93.5% alive a year after diagnosis, compared to expected 65% survival based on historical studies.

“Immunotherapies are changing the way we treat many cancers, but none of the FDA-approved immunotherapies are an option for patients with glioblastoma, and the approved treatment options we do have for patients with the disease remain quite limited both in number and in effectiveness,” says Dr. Fenstermaker, who is Chair of Neurosurgery at Roswell Park and Chief Medical Officer of MimiVax.

“We’re grateful to Fosun Pharma for recognizing the promise that SurVaxM holds, and eagerly look forward to working with our partners both in the United States and China to get these additional clinical studies underway,” adds Dr. Ciesielski, who is Assistant Professor of Neurosurgery at Roswell Park and Chief Executive Officer of MimiVax.

Drs. Ciesielski and Fenstermaker gratefully acknowledge donations to Roswell Park in support of their research at critical early stages.

“We’re so grateful for the community’s generous and enthusiastic support of this work,” adds Dr. Fenstermaker. “The initial laboratory investigations that paved the way to where we are now would not have been possible without individual donors who contributed to fundraising efforts like The Ride For Roswell.”