Overcoming the Odds at Olmsted Center for Sight

A local toddler’s story of survival is a true testimony to the power of early intervention, love, laughter, and education in troubling times 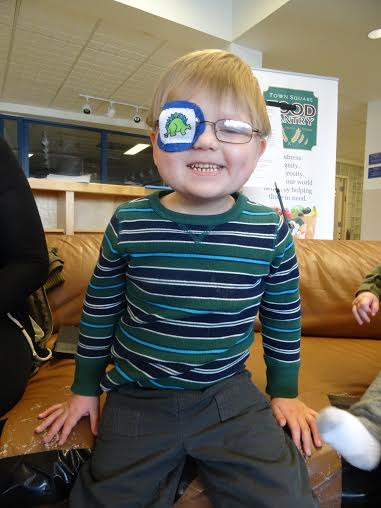 Four-year-old Oliver Laub was diagnosed with a highly malignant brain tumor in the back of his head during the first year of his life. He received extensive treatment including radiation and surgery up until March 2013. The ordeal left Oliver with unique physical, speech, and vision needs.

“Without smiles and laughter we would have all crumbled,” said Shawna Laub, Oliver’s mom. “We had to have humor and keep it fun, so we’d bring water guns to the hospital and shoot the nurses or his dad when he’d get there after work.”

Shawna heard about about the Olmsted Center for Sight (Olmsted) from Oliver’s physical therapist. Olmsted helps people who are blind or visually impaired achieve their highest level of independence. She also learned about the Olmsted’s Early Education Program, a special place where children ages three to five with disabilities and especially vision impairments, can succeed.

I met Oliver after he woke up from his nap at Olmsted’s Early Education location within Temple Beth Zion at 700 Sweet Home Road in Amherst. He wore a little eye patch with a dinosaur on it and was full of life. “I had a great day at school because it’s super awesome here,” Oliver told me while he ran around the room with excitement. “I got to go to the gym and play with cars.”

Shawna described the program as being very hands-on and individualized. Oliver has a teacher, teacher’s aid, and one-to-one aid that work together to provide him with the very best chance to succeed. “He’s really blossomed here, especially with his speech,” Shawna said. “He started off not speaking much due to his oral deficiency and paralysis, and now he’s talking all the time.”

For families going through something similar with their child, Shawna recommends that you make sure to set time aside for yourself, and even seek counseling. She says, “Needing help doesn’t make you weak. It was such an emotionally charged and terrifying time during the first few years of Oliver’s life. I should have taken better care of myself.”

Luckily Shawna and Oliver are back on track with great thanks to Olmsted’s Early Education Program. Mary Beth Peters, director of the program, said, “I love this job. The kids make you smile and I know we’re doing something really important for the community.”

Although Oliver will be leaving the program next year, Olmsted can continue to help with services through his entire life, such as low-vision optometry clinics, educational classes, adaptive living counseling, job training, and senior vision services. Their headquarters are located at 1170 Main Street in Buffalo. For more information, go to http://olmstedcenter.org, or call 716-882-1025.