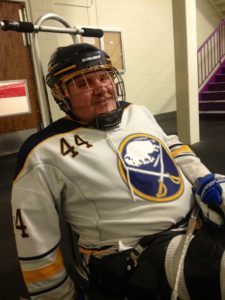 On 10/29/2016, Matthew was welcomed by Buffalo State College, the State University of New York, after the football team joined the Muscle Movement Foundation. Matthew served as the team’s honorary captain as the football team defeated Hartwick College 51-33. He shared his survivor story with the team, cheerleaders, and community, inspiring them to unite in the fight against muscle disease; a fight over one million Americans endure. He was thrilled to receive another phone call from Muscle Movement Foundation Founder and President, Rob DeMasi, who informed Matthew about Coach Stutzman and the wrestling team’s recent collaboration. Matthew plans to proudly attend the wrestling match, share his survivor story with the team, and gain the support of his local community.

Heroically, Matthew Murray refuses to use any of the financial support that is gained from the University of Buffalo Wrestling Team for himself. Proceeds that are received from the match, and the team this season, will be re-directed to another “Muscle Champion” in need, to assist them physically, financially, and/or emotionally in their fight against muscle disease. The Muscle Movement Foundation provides essential accommodations, such as home supplies and equipment to increase physical autonomy, financial support to assist with out-of-pocket expenses, and emotional support to improve their Muscle Champions’ emotional well-being. Matthew Murray and Coach Stutzman hope to inspire the Buffalo community to join their efforts and help “Pin Muscle Disease,” to accommodate a “Muscle Champion” in need!

*The Muscle Movement Foundation is an IRS-registered 501(c)3 organization dedicated to the fight against neuromuscular disease. All contributions are considered tax-exempt ID #: 46-0554622.

Muscle Movement Foundation Founder and President, Rob DeMasi, is also living with neuromuscular disease. His form of muscle disease is called myasthenia gravis. Rob was a nationally recognized wrestler and Division I recruit from Wilmington, DE. His career was cut short due to the battle against muscle disease. Nonetheless, Rob has founded the Muscle Movement Foundation and inspires sports teams across the country to unite for his fellow “Muscle Champions” in need.

Rob DeMasi and University of Buffalo Head Wrestling Coach John Stutzman hail from neighboring cities in Delaware, hence where the relationship was formed.