BUFFALO, N.Y. — A multidisciplinary team led by Roswell Park Comprehensive Cancer Center has identified troponin, a protein that enters the bloodstream only when the heart is damaged, as an early and reliable predictor of myocarditis in cancer patients receiving immunotherapy with immune checkpoint inhibitor (ICI) drugs. Findings of this retrospective study, which have been published in the Journal for ImmunoTherapy of Cancer, suggest that weekly troponin monitoring during the first six weeks of treatment could help physicians detect this rare but potentially fatal side effect of cancer immunotherapy. 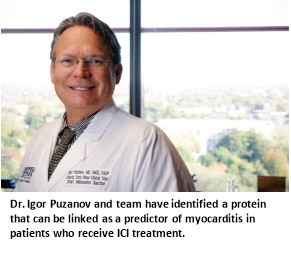 Immunotherapy has emerged as a promising cancer treatment, particularly for solid tumors like melanoma. A handful of FDA-approved drugs such as nivolumab and pembrolizumab are increasingly used in certain types of immunotherapy to “supercharge” the patient’s immune system to recognize and attack cancer cells. Although it occurs in fewer than 1% of cases, potentially fatal inflammation of the heart muscle called myocarditis can occur as a result of ICI immunotherapy. Early detection of myocarditis, which carries a 40% to 50% risk of death, is critical, but there are currently no clear ways to accurately predict or identify this type of ICI-associated toxicity.
In an effort to more accurately detect myocarditis among immunotherapy patients, a multidisciplinary team headed by experts in the fields of pharmacology, cardiology and oncology at Roswell Park retrospectively reviewed the records of 1,001 cancer patients treated with one or more ICIs at Roswell Park over a four-year period from 2016 to 2020. The investigators paid special attention to the significance of specific prognostic biomarkers, including troponin, B-type natriuretic peptide and creatine kinase to determine their ability to predict myocarditis.

During this study period, Roswell Park clinicians also began routinely monitoring troponin levels in melanoma patients who were starting ICI treatment, as previous Roswell Park research indicated that a combination of two ICI drugs, ipilimumab and nivolumab, increased the risk of immunotherapy-related myocarditis. Patients in this program were monitored every week for the first six weeks of ICI immunotherapy, and any patient showing an elevation in troponin levels or signs of cardiotoxicity, such as angina or arrhythmia, was referred to a cardio-oncology team for complete evaluation, including ECG, echocardiogram or cardiac MRI.

Among the 1,001 patients who received ICI therapy during the four-year study period, 15 patients (1.5%) showed evidence of probable ICI-related myocarditis (11 cases were severe, and 4 cases were mild). The Roswell Park team identified troponin as the earliest and most reliable predictor of myocarditis among all the biomarkers studied, and high levels of this protein were significantly associated with serious outcomes during the early phase of ICI cancer treatment. The researchers also found that the troponin-monitoring program led to earlier detection of myocarditis, earlier initiation of steroid treatment and better outcomes among immunotherapy patients.

“It is critical to not only detect these rare cases of myocarditis early but also understand why this type of toxicity develops and how to prevent it,” says Igor Puzanov, MD, Senior Vice President of Clinical Investigation, Chief of Melanoma and Director of the Center for Early Phase Clinical Trials at Roswell Park, first author of this collaborative study. “It’s important for comprehensive cancer centers like Roswell Park to develop standard operating procedures to guide all doctors on how to offer the best possible treatment for their patients. Our findings offer a simple, proactive approach to more effectively diagnose and treat this life-threatening condition early, when it is most treatable.”

The results of this study support the use of outpatient troponin surveillance for the crucial step of early detection of ICI-associated myocarditis. Weekly monitoring of troponin levels led to earlier detection of myocarditis and thus earlier treatment with corticosteroids, which helped stop disease progression and improved the overall outcome. The findings also stress the importance of a multidisciplinary approach to cancer treatment, including prompt cardiac evaluation for patients displaying cardiac symptoms during cancer immunotherapy.

This work was supported by grants from the National Institutes of Health (award Nos. P30CA016056, K08HL131987 and K08CA197966), the Roswell Park Alliance Foundation and the Department of Defense Lung Cancer Research Program.