Art and Book Event at Allen Street Hardware, May 1, 3-7 pm 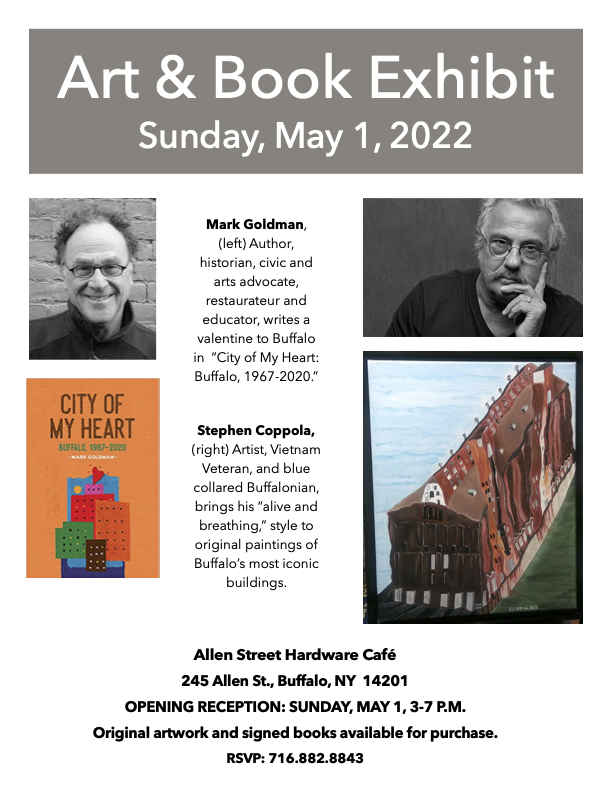 An exhibit of artwork by artist Stephen Coppola and a new book by author Mark Goldman will be on display at Allen Street Hardware, 245 Allen St. Buffalo, New York, beginning April 25, 2022. An opening reception will take place Sunday, May 1, 3-7 p.m.

Buffalo born Stephen Coppola is a proud product of Buffalo’s West Side. He attended Lafayette High School, is a Vietnam Veteran, and had a lengthy career as a construction worker before he picked up his first paintbrush and began to capture the spirit and form of iconic Buffalo architecture. His work has been showcased in the Tillou Fine Art Gallery in Brooklyn, NY, the Daily Planet in Buffalo and numerous galleries.

Mark Goldman is an author, historian, civic and arts advocate, restaurateur and educator. A graduate of Brandeis University, he earned his doctorate in history at the University at Buffalo. His newest book, City of My Heart: Buffalo, 1967-2020, follows three earlier books about Buffalo, including: City on the Edge: Buffalo, New York, 1900-Present; City on the Lake: The Challenge of Change in Buffalo, New York; and High Hopes: The Rise and Decline of Buffalo, New York. He is also the author of Albright: The Life and Times of John J. Albright, Max Meets the Mayor, and Tillie, A New York City Girl: 1906-2001.

Both Stephen Coppola and Mark Goldman will speaking at the opening reception about their recent work and how Buffalo has inspired them to create works of art and literature.