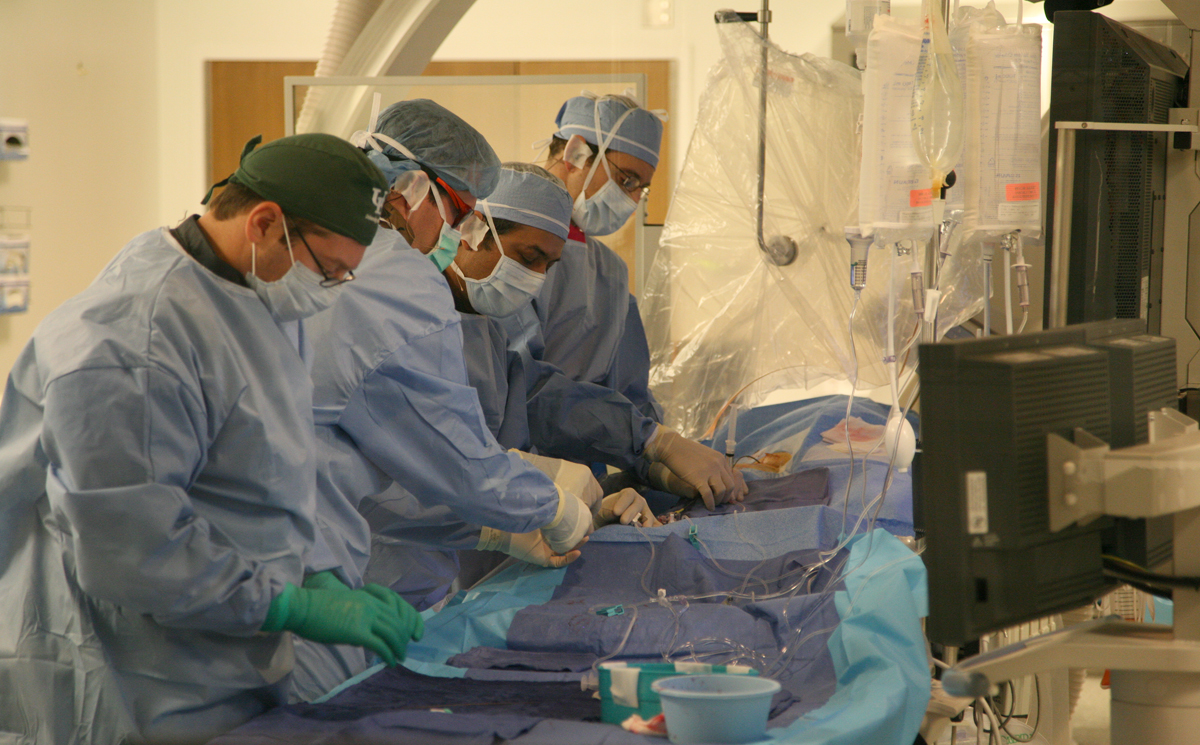 In a live demonstration, Gates Vascular Institute (GVI), in partnership with the Jacobs Institute (JI) and a medical device company, today broadcast a case to Japan and South Korea, reaching over 150 physicians and health care professionals. The virtual proctorship broadcast, led by electrophysiologist, Chee Kim, M.D., F.A.C.C., was a step-by-step demonstration of cardiac resynchronization therapy, in which a small pacemaker device was inserted to restore the normal timing pattern of the patient’s heartbeat.
Electrophysiologist at GVI, Hiroko Beck, M.D., was on-hand to provide the Japanese translation of the teaching demonstration while the medical device company sponsor made a Korean translator available for attendees.
Historically, GVI physicians would travel around the world to provide in-person training opportunities for local medical professionals. With recent technological advancements, teaching physicians are able to reach a wider audience creating a more impactful discussion based on the number of international physicians training and participating in the conversation.

“Modern technology is making it possible for medical professionals from all over the world to collaborate without ever having to leave their respective countries. This allows us to transform traditional healthcare into a modern healthcare platform providing new ways to improve patient care and how we educate others on best practices,” explained Kim when asked about the benefits of the broadcast.

Participants joined the broadcast via mobile device or computer with a chat room-like environment. Kim described, step by step in thorough detail, the correct way to successfully implant a pacemaker while physicians in Japan and South Korea responded with comments and questions.

The teams at GVI and JI have led 30 other virtual proctorship broadcasts in the United States and around the world in 2020, with plans to do more both nationally and internationally this year.

The JI is a non-profit organization whose mission is to accelerate the development of next-generation technologies in vascular medicine by fostering collaboration with physicians, engineers, entrepreneurs and industry.

GVI, part of Kaleida Health, is a global leader in the treatment and prevention of cardiac, stroke and vascular diseases.