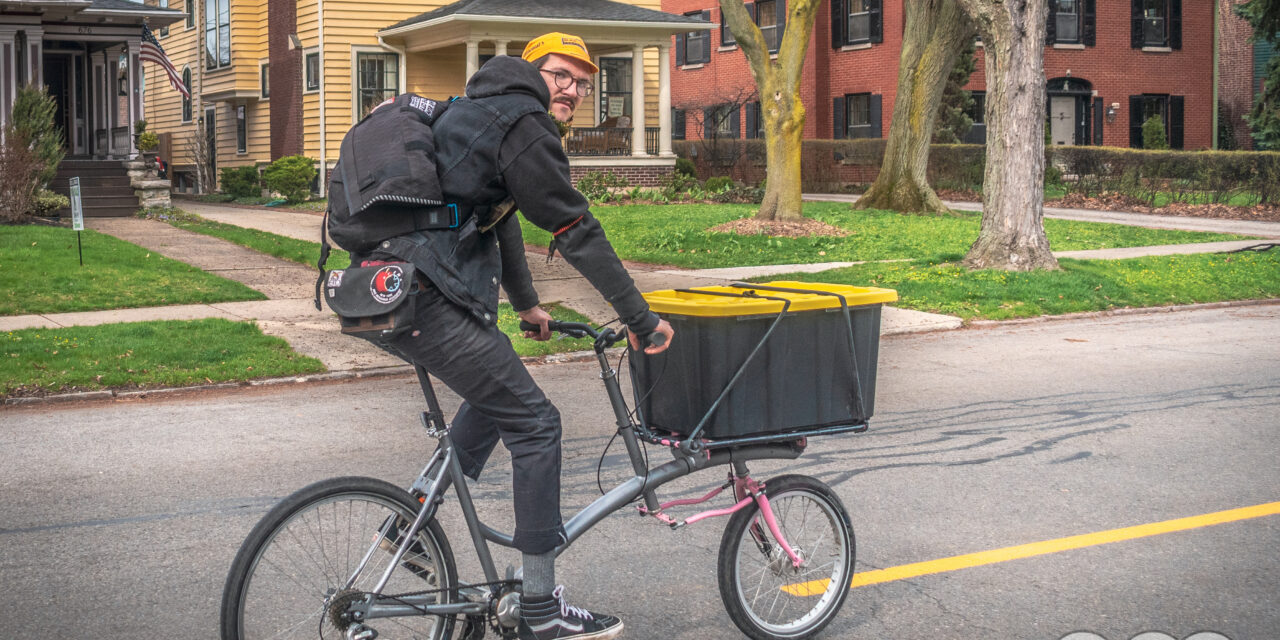 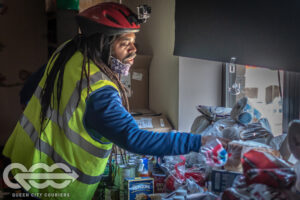 Queen City Courier’s story begins with a couple of guys, Ben Cliff and Shane Paul, talking about how cool it would be if Buffalo had its own bike courier business. There have been bike courier businesses here before — Speedy Courier operated for nearly a decade. Buffalo weather doesn’t limit bike couriers. It’s the resistance to the idea of bike couriers. Colder cities with worse weather have long had couriers. Toronto has been Canada’s messenger mecca for more than 50 years, and Montreal is even colder.

Shane and Ben wanted to create a better company than others they had seen and experienced. A former New York City bike messenger, Ben knew how exploitative those businesses could be. They wanted to create a company that added value to a client’s business and to its couriers’ lives. During our first meeting, I told them they were going to have to show what bikes could do if they were going to succeed.

That opportunity came with COVID-19, when PUSH Buffalo announced that they would be delivering groceries to vulnerable populations. So, we offered to dispatch, pick up, and do the deliveries for them. For two months, Queen City Couriers delivered more than five tons of food to every corner of the City of Buffalo, in all types of inclement weather, on bikes. People started understanding the utility of bikes because they could see it.

Queen City Couriers went on to become incubated and mentored by Social Mobility Inc., a nonprofit organization that manages bike sharing in Buffalo and Niagara Falls. This year, Queen City Couriers won a grant to deliver 400 meals every week for BNMC’s Food as Medicine program. We anticipate delivering all of the meals in just one day a week, with the help of an extra-large Bikes at Work trailer.

Grant-funded work like delivering farm shares has been our main business. But we are expanding the vision and benefit of courier services, and leveling out the cyclical nature of the business. To date, we’ve delivered refrigerators, shopping carts, flower box planters, and bicycles. We’ve built our business on treating people with honesty and fairness. We are also an eco-friendly and gas-free delivery option.

I have learned that businesses that don’t innovate get left behind. In 10 years of riding as a courier across cities throughout the United States, and researching for my book, I could never understand the myopia of a hyper-competitive industry in a race to the bottom. When I left the business in 2001, I didn’t think it could get worse, but online delivery platforms proved me wrong. After a courier from France read my book and organized a nation-wide strike, I started reading everything I could about delivery platforms, viewing their failings as our opportunities. Queen City Couriers is committed to a resilient future for Buffalo. So far, that idea seems to appeal to people.

Rebecca Reilly is the Chief Operation Officer of Queen City Couriers and author of Nerves of Steel: Bicycle Messengers in the United States. Learn more at https://www.qccouriers.com.