FL118, derived from Chinese tree bark, could be further developed as a treatment for pancreatic or colorectal cancer

BUFFALO, N.Y. — A small molecule discovered and developed by a team of scientists led by Fengzhi Li, PhD, Associate Professor of Oncology in the Department of Pharmacology and Therapeutics at Roswell Park Comprehensive Cancer Center, eliminates human pancreatic and colorectal tumor cells by binding to and degrading DDX5, a powerful cancer-causing protein. The latest research results from Dr. Li’s lab, published today in Clinical and Translational Medicine, suggests that FL118, a compound derived from Chinese tree bark, could be further developed into a targeted treatment for pancreatic cancer and colon cancer, and possibly for other solid and liquid tumors as well. 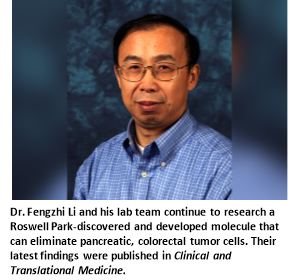 Pancreatic ductal adenocarcinoma (PDAC), which accounts for more than 90% of all types of pancreatic cancer and is expected to become the second-largest cause of cancer-related deaths by 2030, is an aggressive and treatment-resistant disease with limited therapeutic options. Colorectal cancer (CRC) is the third most common cancer and the third leading cause of cancer deaths. Therefore, development of novel agents to more effectively treat these cancers remains an urgent clinical need.
Ten years ago, Dr. Li and fellow Roswell Park researchers developed FL118, a promising anticancer agent derived from camptothecin, a component found in the bark and stem of a tree native to China. Camptothecin-containing tree bark has been used as a traditional Chinese remedy for centuries, and the FDA has approved two synthetic camptothecin analogs — irinotecan and topotecan — for the treatment of various cancers. Both irinotecan and topotecan target topoisomerase I (TOP1), a protein critical for the growth and spread of cancer cells, but because TOP1 is also needed for renewal and growth of normal tissue, both compounds are highly toxic to humans, severely limiting their use in the treatment of cancer patients.

FL118 effectively eliminates human colorectal and head/neck tumors in preclinical pancreatic cancer models with greater potency and a lower toxicity profile than irinotecan and topotecan, but the direct target of this new camptothecin analog was previously unknown. The effect was observed ex vivo in PDAC and CRC cancer cell lines and in patient-derived xenograft models of PDAC.

In the study published today, the Roswell Park scientists report that FL118 directly binds to and degrades DDX5 (also known as p68), a protein that is increasingly recognized to play an important role in tumor development.

“The identification of FL118’s target is a key step toward developing targeted therapies, as DDX5 levels can be used as a biomarker to identify patients who will benefit most from FL118 treatment,” says Dr. Li, who is the primary corresponding author of the study.

“DDX5 is overexpressed in many types of cancer, but not in normal tissue, and aberrant expression of DDX5 plays pivotal roles in cancer development, progression, metastasis and treatment resistance,” says Xiang Ling, PhD, a scientist in Roswell Park’s Department of Pharmacology and Therapeutics and the first and co-corresponding author of this study. “Our research has confirmed that DDX5 controls the expression of many other cancer-associated proteins, inducing survivin, Mcl-1, XIAP, c-Myc and mutant Kras, suggesting that DDX5 is a master regulator of cancer development and progression.”

The ability of cancers to resist treatment with chemotherapy stems from the vast heterogeneity observed among patients, which makes it difficult to predict or control the response to treatment. The team of Roswell Park researchers took advantage of this heterogeneity, using CRISPR technology to remove DDX5 from pancreatic cancer cells and creating various preclinical models of human cancer. Most PDAC tumor cells died after DDX5 was removed, but Dr. Li and his colleagues were able to obtain several cell clones that appeared to be less reliant on DDX5 for survival. These surviving clones showed resistance to FL118, confirming that DDX5 was in fact a direct target of this novel synthetic camptothecin analog.

“We consistently found that removal of DDX5 from cancer cells resulted in slow tumor formation and growth, and tumors with high levels of DDX5 expression were more sensitive to FL118 treatment than tumors with low expression of this oncogenic protein,” says Dr. Li. “These findings are quite promising, as they suggest that DDX5 expression status can be used as a biomarker to indicate the sensitivity of PDAC and CRC tumors to FL118 treatment, giving clinicians the ability to personalize and target treatment by identifying patients who will have the best response to FL118 therapy.” 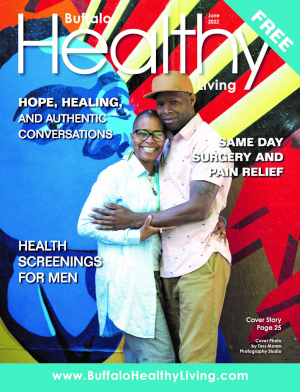