Smoking and Vaping Had Overlapping Adverse Health Effects, Dual Product Use May Be Worse 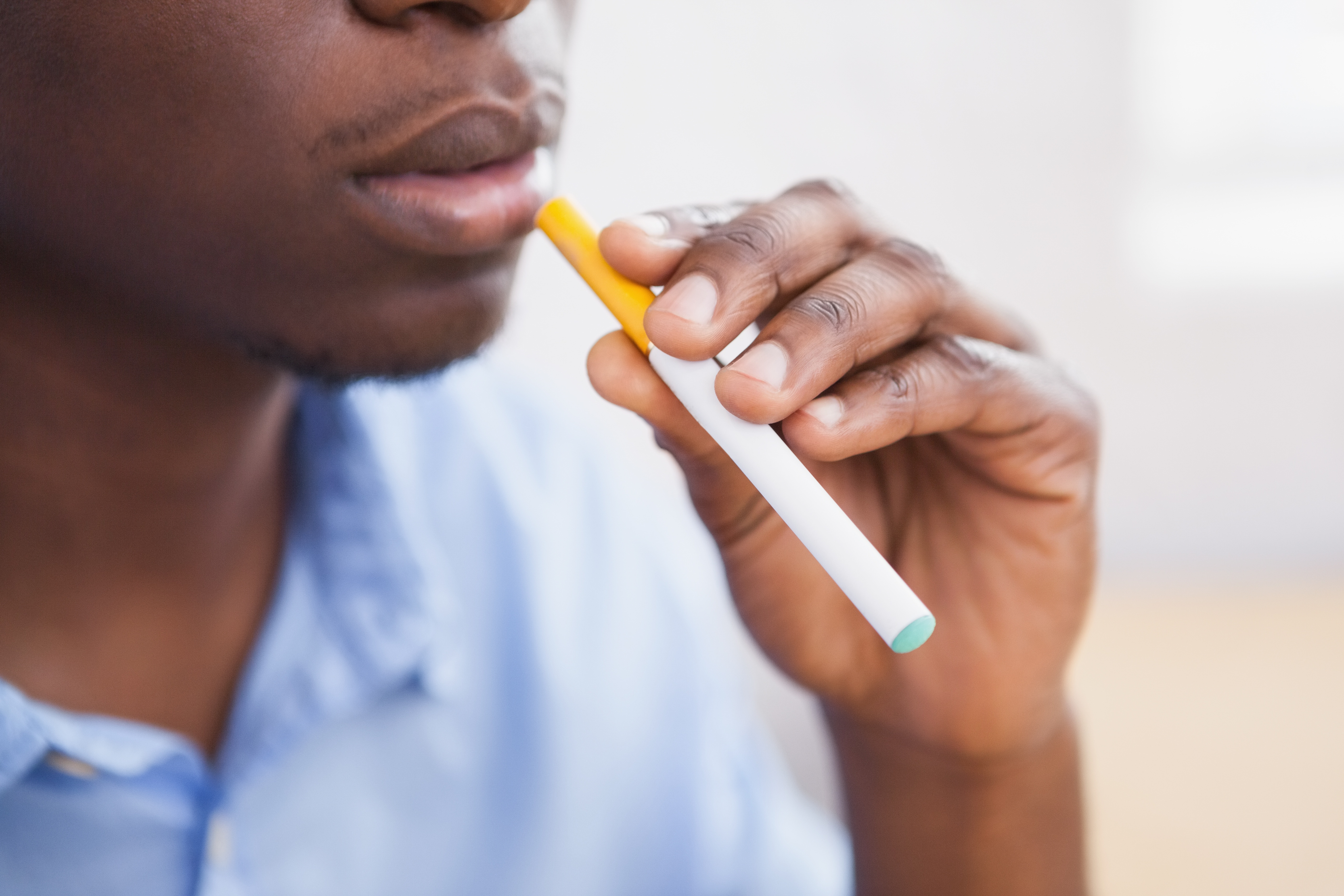 Airway irritation from smoking or vaping appeared to be the source of vascular damage, according to two new studies in ATVB journal

DALLAS, Oct. 26, 2022 — Two related studies, one in humans and the other in rats, found that the cardiovascular effects of cigarettes and e-cigarettes are strikingly similar, and these harmful effects on blood vessel function are likely caused by airway irritation due to inhalation of a foreign substance, rather than a specific component of the cigarette smoke or e-cigarette vapor (aerosol), according to new research published today in the American Heart Association’s peer-reviewed journal Arteriosclerosis, Thrombosis and Vascular Biology (ATVB).

Cigarette smoking and e-cigarette vaping are both known to cause endothelial dysfunction, the inability of the large blood vessels to open enough to supply sufficient blood to the heart and other tissues. This can be an early predictor of cardiovascular diseases. Endothelial cells line the inside of all blood vessels and regulate the opening of blood vessels, the exchange of substances between the bloodstream and surrounding tissues, and immune and inflammatory responses.

“The goal of this project was to determine why a growing number of inhaled tobacco products, including combustible cigarettes, heated tobacco products and e-cigarettes, all impair endothelial function despite fundamental differences in these products,” said the lead researcher of both studies Matthew L. Springer, Ph.D., a professor of medicine in the division of cardiology at the University of California, San Francisco. “Thousands of chemicals have been identified in tobacco smoke, some of which are also present in e-cigarette aerosols, either as an original ingredient or as a chemical reaction product of the heating process. We sought to find which specific component of smoke or e-cigarette vapor may be responsible for interfering with blood vessels’ ability to function efficiently.”

Springer and colleagues conducted two studies to assess the effects of smoking and vaping on cardiovascular function in both rats and humans.

Impairment of Endothelial Function by Cigarette Smoke is not Caused by a Specific Smoke Constituent, but by Vagal Input from the Airway

In the rat study, arterial flow-mediated dilation (FMD), which is the ability of the blood vessels to widen, was measured pre- and post-exposure to smoke from four kinds of traditional combustible cigarettes: conventional nicotine, reduced nicotine, conventional nicotine with added menthol and reduced nicotine with added menthol. Menthol is added to many tobacco products, and it may decrease irritation caused by smoking, especially among new smokers, and may play a major role in facilitating nicotine addiction.

The results of the study found that blood vessel dilation was reduced after use of all four types of cigarettes, with the extent of the reduction ranging from 20–46%, depending on the cigarette type. Nicotine was not required for impairment of vascular function, however, higher nicotine levels were associated with a greater decrease in FMD than lower nicotine levels and menthol was associated with a lower decrease in FMD than non-menthol products.

Springer emphasized that the finding that the addition of menthol resulted in less severity of flow-mediated dilation impairment should not be over-interpreted to suggest that menthol is a beneficial additive in smoking and vaping products because the impairment was still substantial and menthol has other harmful effects.

The rats were also exposed to two of the main gases found in both smoke and e-cigarette aerosol as well as clean carbon nanoparticles to evaluate the effects of those types of components on blood vessel dilation. The gases and carbon particles had similar impairment effects to whole tobacco smoke, despite representing completely different chemical and physical components of smoke.

“Because flow-mediated dilation was impaired by whole smoke, gas phase components of smoke, and plain carbon particles, with no single constituent uniquely responsible, we then explored whether the mechanism involved a common irritation response from the airway involving the vagus nerve,” Springer said.

The vagus nerve is a major component of the parasympathetic nervous system, which controls involuntary internal organ functions. It is responsible for the regulation of digestion, heart rate, respiratory rate, vascular dilation, inflammatory responses and pulmonary functions, such as the cough reflex and mucus production.

To test this hypothesis, researchers exposed anesthetized rats to smoke after severing the vagus nerves. They found that preventing nerve signals in the rats’ lungs from reaching the rest of the body completely prevented any vascular functional impairment by smoke. These findings suggest that endothelial dysfunction may be caused by a vagus nerve-dependent mechanism resulting from respiratory irritation and pulmonary sensory nerves.

“We were surprised to discover that it’s not a specific foreign material being inhaled that causes harmful cardiovascular effects – it’s the fact that some kind of irritant is being inhaled in the first place, regardless of what it was,” Springer said. “All inhaled products are likely to have similar harmful effects on vascular function.”

Springer noted that the lack of a specific toxin that accounts for vascular impairment means that regulatory agencies cannot rely on prohibiting specific ingredients to avoid adverse effects of inhaled products.

This work was supported by grants from the National Heart, Lung, and Blood Institute, a division of the National Institutes of Health (NIH), and the U.S. Food and Drug Administration Center for Tobacco Products; the National Cancer Institute at the NIH and with support from the Elfenworks Foundation (in memory of Deb O’Keefe) and the Roy E Thomas Medical Foundation.

The second study was conducted at multiple centers and included individuals who reported they regularly smoked combustible cigarettes, people who reported they regularly used e-cigarette products and people who reported no nicotine product use. The cardiovascular health of all participants was evaluated at a single point in time, with researchers measuring endothelial function and performing cell culture experiments to evaluate the association of chronic e-cigarette use on levels of vascular impairment. Measures included the production of nitric oxide, a key molecule for properly functioning blood vessels, and endothelial cell permeability, which reflects how easily substances can leak out of blood vessels. Increased vessel permeability leads to the leakage of larger molecules and may contribute to edema, or swelling caused by excess fluid in tissues, inflammation, heart disease and other diseases such as cancer.

“Because the combustible cigarette smoke and e-cigarette aerosol that people inhale doesn’t have direct contact with the blood vessels, and the blood does, we took blood serum (the clear liquid in blood that remains after it clots) from every participant and put it in contact with endothelial cells in a culture dish to evaluate how the different serum samples affected the functional behavior of those cells.” Springer said. “This enabled us to investigate the effects on endothelial cells of substances in smoke/aerosol that are absorbed through the lungs and enter the bloodstream, and also any other circulating molecules that the body might produce in response to inhaling the smoke and/or aerosol, including proteins involved in the inflammatory response.”

The study included 120 adults, ages 21-50 years without cardiovascular disease. Participants included people who had smoked more than 5 combustible cigarettes a day for a year or longer; people who used electronic cigarette devices 5 or more times a week for 3 months or longer; and people who did not currently smoke or vape.

The analysis found that prolonged vaping and cigarette smoking both cause changes in the blood that affect endothelial function, although in differing ways.

“The distinct patterns of these heart disease risk biomarkers in blood serum of frequent users of combustible cigarettes and e-cigarette products indicate that, despite the similar physiological effects, e-cigarette use and smoking trigger fundamentally different molecular responses. Our findings suggest that vaping, although not smoking combustible cigarettes, causes changes in the blood that increase the potential for leakage in the blood vessels and that both smoking and vaping cause changes in the blood that lead to endothelial dysfunction and an increased risk of future cardiovascular events in otherwise healthy people,” Springer said.

The study also found that flow-mediated dilation was significantly lower (by more than 5%) among the participants who regularly used e-cigarettes and those who regularly smoked combustible cigarettes compared to people who neither smoked nor vaped. In previous research, a 2% reduction in vessel dilation has been associated with a 15% increase in heart disease risk, suggesting that the impact of smoking and vaping is clinically significant.

“It’s important for regulators, clinicians and the public to realize that vaping is not harmless,” Springer said. “Smoking and vaping can have similar harmful cardiovascular effects but each condition causes some potentially harmful effects that the other does not. These differences indicate that dual product use, meaning smoking combustible cigarettes and also using e-cigarette products, may actually be worse for vascular health than either smoking or vaping alone.”

Studies published in the American Heart Association’s scientific journals are peer-reviewed. The statements and conclusions in each manuscript are solely those of the study authors and do not necessarily reflect the Association’s policy or position. The Association makes no representation or guarantee as to their accuracy or reliability. The Association receives funding primarily from individuals; foundations and corporations (including pharmaceutical, device manufacturers and other companies) also make donations and fund specific Association programs and events. The Association has strict policies to prevent these relationships from influencing the science content. Revenues from pharmaceutical and biotech companies, device manufacturers and health insurance providers and the Association’s overall financial information are available here.