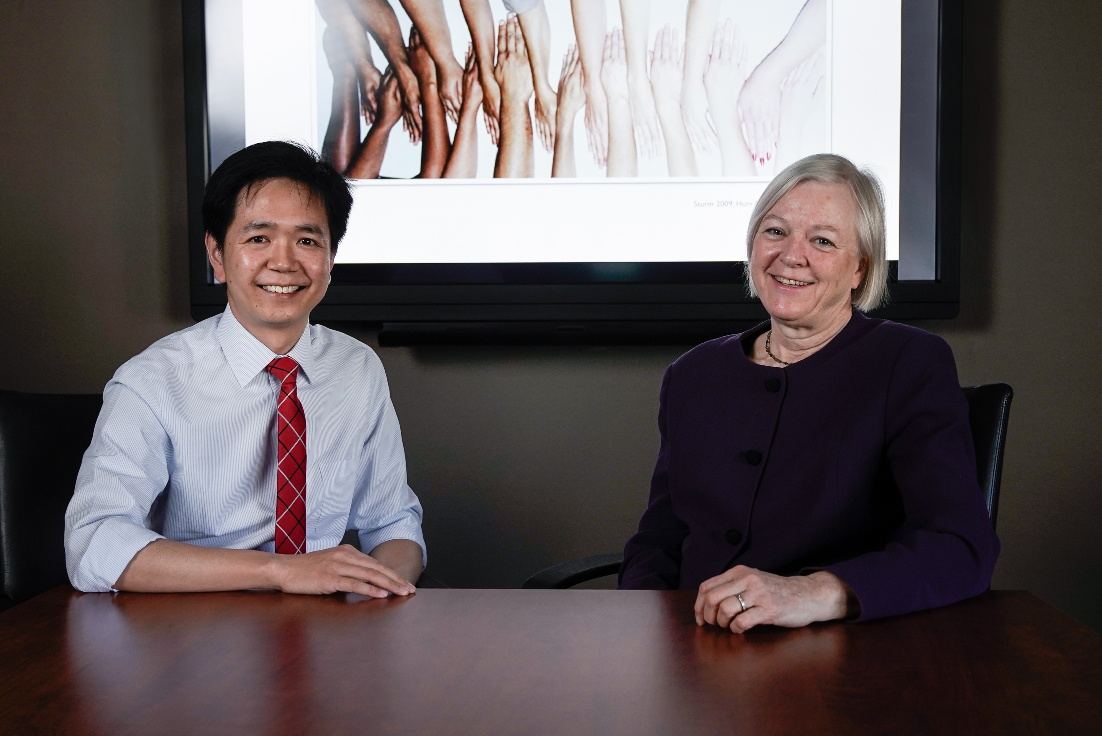 A new collaboration between two Western New York cancer research leaders will help oncologists learn whether Black and white cancer patients respond differently to a game-changing immunotherapy treatment, and seeks to improve the safety and effectiveness of these newer drugs in diverse populations.

Funded by a two-year, $2.08 million grant from the National Cancer Institute (NCI), with the possibility of additional funding after the initial phase of study concludes, Roswell Park Comprehensive Cancer Center and the University of Rochester’s Wilmot Cancer Institute are working together to fill a major gap in the science around immune checkpoint inhibitors (ICIs).

Checkpoint inhibitors — such as nivolumab (Opdivo) and pembrolizumab (Keytruda) — have become standard care for 16 different types of cancer, both early and advanced-stage. They work by blocking signals in the immune system, clearing a path for the body’s natural T cells to kill cancer. Since their approval in 2011, the use of these drugs has skyrocketed and is believed to be partly responsible for a significant drop in U.S. cancer deaths.

Still, there are many opportunities to improve the care of patients who may benefit from ICIs. For example, few people of African ancestry participated in the original clinical trials to evaluate these treatments. The Roswell Park-Wilmot collaborators plan to collect data that will allow them to investigate side effects, toxicities and outcomes among people of African ancestry who take immune checkpoint inhibitors.

The research builds off discoveries from Roswell Park that helped explain why standard treatments are often less effective in patients of African ancestry.

“Checkpoint inhibitors have largely not been studied in Black cancer patients, but our recent findings show that there may be a particular benefit to these immunotherapies for cancer patients of African ancestry — across a variety of cancer types,” says Christine Ambrosone, PhD, Chair of Cancer Prevention & Control at Roswell Park and a Co-Investigator on the study.

“Because Black cancer patients tend to have a prevalence of what we call ‘exhausted,’ nonfunctional T cells, we realized they may be more likely to do well on immune checkpoint inhibitors, which target the exhausted T cells to revive them and restore their ability to fight cancer cells,” says Song Yao, PhD, Professor of Oncology in Roswell Park’s Department of Cancer Prevention and Control, Co-Principal Investigator on the study. “But we can’t know this without further study, and this new project will tackle that knowledge gap in a large and diverse patient population.”

The Wilmot team, under the leadership of Co-Principal Investigator Charles Kamen, PhD, MPH, and Co-Investigator Gary Morrow, PhD, MS, will leverage the center’s position as a hub for the National Community Oncology Research Program (NCORP). Dr. Morrow, a Dean’s Professor of Surgery at the University of Rochester Medical Center, is co-Principal Investigator for the NCORP program, which is supported by a $29 million NCI grant. The NCORP network will allow the researchers to carry out the immune checkpoint study at hundreds of community oncology clinics in the NCORP network across the country. The team also plans to enroll study participants in Western New York.

“Our project is designed to get the full 360 picture of Black patients who receive immunotherapy,” says Dr. Kamen. “Not only are we measuring their response to treatment, but we’re also looking at factors like discrimination by providers and health care systems and how often treatment is stopped, so that we have a better understand of equity and access to high-quality care.”

The Roswell-Wilmot collaborators have designed a large national study — known as the DiRECT Cohort — that will seek to enlist 600 Black patient volunteers and 1,200 white cancer patients of European ancestry.

The national study is known as the DiRECT cohort.

“The National Cancer Institute Community Oncology Research Program (NCORP) Research Base we have had at Wilmot for three decades is ideally suited to help direct a large nationwide study like this,” says Dr. Morrow. “We’re eager and proud to actively participate in this important research with our longtime colleagues and friends from Roswell.”

The project is the first large, national study of diverse patients treated with ICIs.

The researchers will conduct genetic analyses, for example, of the percent African ancestry in each Black patient, as well as social determinants of health, such as access to healthcare, as a predictor of treatment response and toxicities. In addition, they will evaluate how often treatment delays occur among the Black and white patients due to severe side effects, and the short- and long-term treatment outcomes.

Cancer patients at member sites within the Roswell Park Care Network will have access to the study through the participation of study Co-Investigator Igor Puzanov, MD, MSCI, FACP, Senior Vice President of Clinical Investigation at Roswell Park.

The new funds are in addition to the $5.2 million awarded to Roswell Park last year to study these dynamics using data reported to the New York State Cancer Registry.