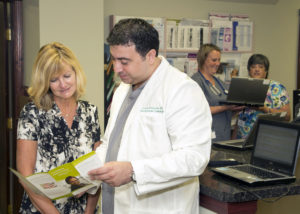 More than 20 years ago, having a hysterectomy or any other gynecological surgery was considered major, often requiring a 10-day hospital stay and round-the-clock nursing care. Over the years things changed, with the introduction of laparoscopic surgery, which was far less invasive. And most recently, women are being provided with more options than ever before for improving their lives through minimally invasive surgery for many gynecological conditions.

Kirakosyan is particularly excited to share information about single incision laparoscopic surgery (SILS), which is the very latest advance in minimally invasive surgery. SILS uses a flexible laparoscope and instruments to perform complex procedures through a single two centimeter (roughly ¾ inch) incision in the belly button. The incision is easily hidden, and much more pleasing cosmetically, which makes SILS a preferred option for gynecological surgery.

“SILS is very challenging and requires additional training. It is a technique that has a learning curve. This is even true for surgeons experienced in conventional laparoscopy. However, with advances in technology we can now perform many gynecologic surgeries, like oophorectomy, salpingectomy, tubal ligation, ovarian cystectomy, surgical treatment of ectopic pregnancy, and both total and partial hysterectomy, using this method,” says Kirakosyan.

Kirakosyan says, “Several recent studies indicate that SILS can also be safely used to treat many benign and malignant gynecologic conditions that are currently treated using laparoscopy requiring more than one incision. The big difference with SILS is that it requires only one belly button incision, which leads some surgeons surgeons to describe it as scarless surgery.”

If you have been diagnosed with a gynecologic condition that requires surgery, and would like to learn more about SILS, Dr. Armen Kirakosyan encourages you to contact him at 716-883-4350 or at 716-656-4077 to see if you are a good candidate for this modern approach.