What is ITP Blood Disorder? 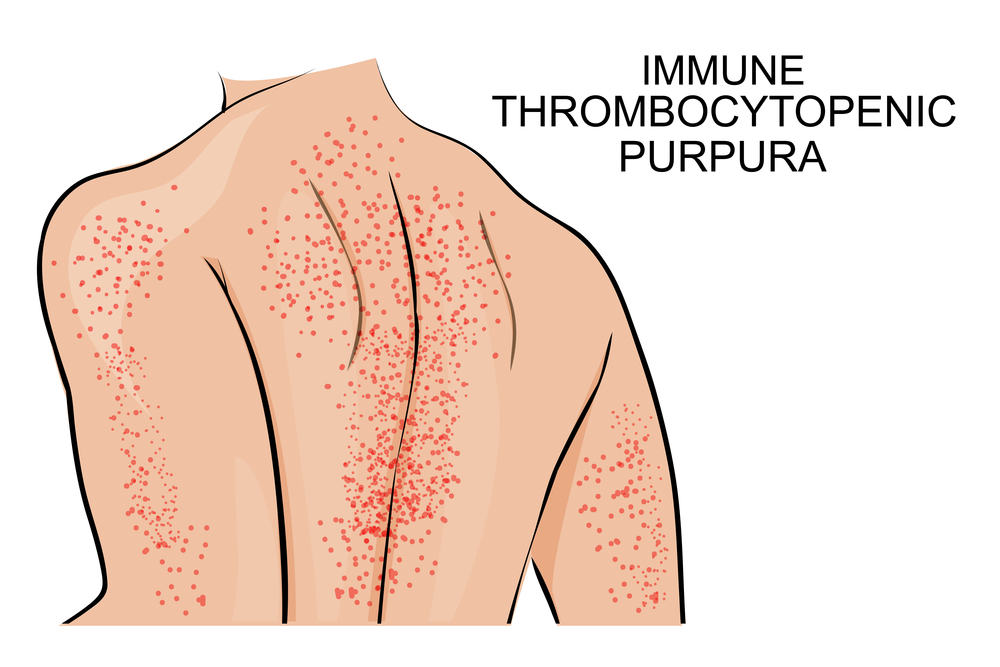 Immune thrombocytopenic purpura (ITP) is a blood disorder in which people experience a decrease in the number of platelets in their blood. Platelets are cells in the blood that help stop bleeding, and when there aren’t enough of them, a person can experience easy bruising, bleeding gums, nosebleeds and heavy menses. ITP, also called autoimmune thrombocytopenic purpura, is caused by an immune reaction against one’s own platelets. Thrombocytopenia is a decreased number of platelets in the blood, and purpura refers to the appearance of bruising.

ITP is very common, and both children and adults can develop the disorder. Acute thrombocytopenic purpura typically affects children ages two through six. In many cases, the cause is unknown, but may occur after a viral illness such as chickenpox. Most cases are temporary and resolve within weeks or a few months without any treatment.

Chronic thrombocytopenic purpura (chronic ITP) can happen at any age, but typically occurs more often in adults and adolescents, and low platelets persist for a minimum of six months to several years, or even a lifetime. Chronic ITP, which affects females more than it does males, can recur often, and requires continual follow-up care with a blood specialist (hematologist).

What Causes ITP? Often, there is no known cause of ITP, but it occurs when the body produces antibodies against its own platelets. Also, a type of white blood cell called T-cells directly attack platelets. Although rare, ITP can be triggered by medications that cause an allergy that cross-reacts with platelets; an infection from a virus that can prompt antibodies to cross-react with platelets; pregnancy; vaccinations, in conjunction with immune disorders such as rheumatoid arthritis and lupus; and low-grade lymphomas and leukemias that produce abnormal antibodies against platelet proteins.

Symptoms of ITP. Our body’s normal platelet count ranges from 150,000 to 450,000. People with ITP have a platelet count less than 100,000. When the platelet count is less than 10,000, more significant symptoms may be seen including extensive bruising, tiny red dots under the skin from small bleeds; nosebleeds; mouth and gum bleeding; heavy menstrual periods; blood in vomit, urine, or stool; and bleeding in the head, which is the most dangerous symptom of ITP because it is life-threatening.

Diagnosing ITP. Diagnosing ITP requires a thorough physical exam, medical history, review of all current medications and tests, including a complete blood count (CBC) and other blood tests to rule out infections, and look for other associated conditions.

Treating ITP. Treatment is based on age, overall health, medical history, and severity of bleeding symptoms. There is no cure for ITP. Treatments including steroids, intravenous gamma globulin (IVGG), and Rh immune globulin offer temporary improvement in platelet counts. When ITP occurs due to a medication, the medication may need to be discontinued. When due to an infection, proper treatment may result in higher platelet counts. There are also immune suppressive medications that slow antiplatelet antibody production, and new therapies that stimulate the bone marrow to produce more platelets. Sometimes, people must make lifestyle changes by altering their activities to protect themselves from bleeding.

Beverly Schaefer, MD is an Assistant Professor of Pediatrics, Pediatric Hematology and Oncology practicing at WNY Blood Care. Learn more at www.WNYBloodCare.org and at https://youtu.be/V3QRF1IjEZ0. Call 716-896-2470 for an appointment.