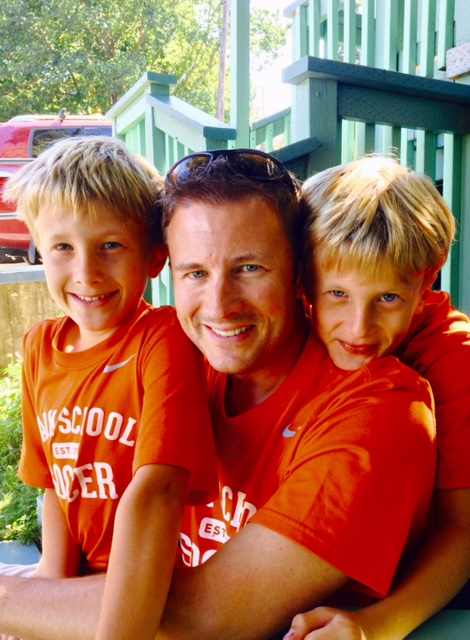 “This is a boy house,” declared the little girl upon entering the foyer of the Higgins home for the first time. “Well, what does that mean?” asked Tripp, father and (sometimes) alpha of the house. “It smells funny and there are a lot of balls everywhere,” she replied. “I think she means it smells musty,” the girl’s mother tried to explain to Tripp.

Tripp lives in his “boy house” in Amherst with his twin sons, Erik and Calvin, who are 11 years old. Tripp lost his wife to breast cancer when the boys were four. He is truly a single parent.

“No doubt that dads work better under a mom system than a dad system,” he explained to me. “Moms are the glue that makes a house run smoothly. Typically, the dad is only brought in to calm everybody down when things escalate to a level five crises,” says Tripp.
Tripp believes that part of the challenges he experiences as a single dad are due to the traditional way in which he was raised. He says, “I have had to try and learn skills that just weren’t part of how I grew up. My sister would go into the kitchen to help my mom while the men typically stood around the grill and hash out the best way to attack the next outdoor project.

“After my wife Gyda died, I had to learn how to cook, do the laundry and try and keep our house somewhat organized. That’s when I realized how great women are at multitasking. I’m still perfecting the art of thinking things out ahead of time. Sometimes we’re at Wegman’s at 6:30 p.m. picking up items I forgot we needed to make dinner, and we are eating at 8:30 at night,” says Tripp.

Tripp is quick to admit that much of his success in raising his two boys alone is due to the help he receives from his family and Tara, the boys’ nanny. His success is also due to his patience and determination to stay present. He says, “As a single parent, your brain has to be spread out more. It’s easy while I am sitting at dinner to start thinking of the laundry, the bill I forgot to pay, how I am going to get the boys to soccer. I have to remind myself to stay in the moment and listen to what they’re saying. I don’t want to get lost in the daily grind of life and forget to live. I always make sure that I’m there for the snuggling and the tears and the laughter, because I don’t want to miss out on any of it.”
Tripp tries to instill his positive outlook in his boys. “I try not be overwhelmed, and to always say, ‘Look, we can fix this.’ Life is fragile and you never know when you are going to lose it. So, we need to live each day to the fullest and not become overwhelmed by the minutiae. I hope that I am able to pass this perspective along to Erik and Calvin.”

Kelly Quigley is the owner of Quigley Consulting. She is also a freelance writer, and provides assistance to businesses with marketing, public relations and social media. She can be reached at (716) 998-0813.